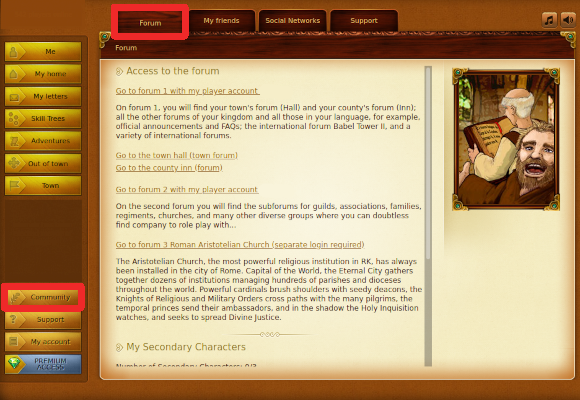 The "Forum" page is very important in many ways: It will open the doors to the fantastic world of roleplay through the forums:

The game of Renaissance Kingdoms is played on a browser-based interface or on the mobile application, but these 3 official forums from which you can roleplay your character without any of the barriers that exist on the interface are very important if you want to fully immerse yourself in this world.

In this game, you cannot access the forums (except for Rome) without having an account in the Renaissance Kingdoms. They are intrinsically linked.

On Forum 1, your access to sections of this forum will depend on the location of your character in the world. For example:

So if you want to participate in a roleplay that takes place far from where your character lives, you'll have to travel... Or use a secondary character!!

Playing the Renaissance Kingdoms without going to the forums is a bit like going to the cinema while being blind, or going to a concert while being deaf (no offence to the blind and deaf of course)! By the way, for your general knowledge, a player who doesn't use the forums sees their character qualified as a Tamagotchi, you know: the little virtual bugs that you just feed and make turn around in their cage... Which is hardly glorifying.

However, nothing and nobody prevents you from playing this game without going to the forums, it is not obligatory at all, you will only lose a great part of the pleasure that one can have there. You can reach level 250 without ever going to the forums, you can also become mayor or duke (although...), and become very rich (that's for sure but it's a bit useless...). You are free to go or not, but I sincerely advise you to do so, it is thanks to the forums that MrGroar became what he is today! Otherwise he would have died in December 2006...

Finally, the forums are supervised by moderators. Be careful, they can ban you if you don't respect the rules in force.