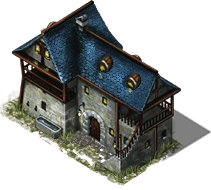 A tavern is a place where your character can talk, think, and act with other characters; eat and drink for money, and play ramponneau or tarantella.

They are accessible via:

In the tavern screen it is possible to:

The taverns have a total of 8 to 10 seats.
In each tavern, 2 places are reserved:

In each village there is at least one tavern in which your character can:

Eat from the menu

In some taverns it is possible to play Ramponneau

A tavern on a node?

Such a tavern is traditionally called a "Campfire" by the players

An active tavern is very interesting for the general activity of a village. Indeed, the more active taverns a village has (meaning taverns where characters go in numbers, drink beer and spend time talking about anything), the more these villages have priority in the random distribution of births. The smallest villages can rest assured that those with a large number of inhabitants will not be favoured because the activity index of the taverns is divided by the number of inhabitants before being compared to that of the other villages when new players arrive.

You can set up your tavern(s) on one (or more) location(s) of the 3D view of the village, where the mayor or planning assistant has allowed for this placement. This choice of location is not definitive as you can later change it for a cost of 5 pounds (which will not be given to anyone, they disappear from the game).