It may happen that there are several players playing from the same connection. You should know that in this case there is then a significant risk for your characters of undergoing eradication from the administrators for the serious misconduct of multi-accounts. It is nevertheless possible for you to officially declare the name of the accounts which share your Internet connection on a one-off or regular basis. This declaration is mandatory, and any breach of this rule may result in the eradication of all the accounts concerned. It is done in the "Connection Sharing" tab of the "My Account" page.

The declaration of shared connections is subject to several rules:

Think about it, it's for your own good. 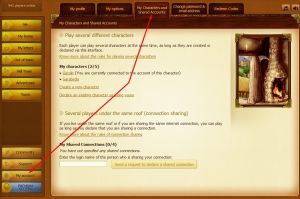 How long after registration must the declaration of sharing be made?

As quickly as possible. The eradications are manual and the administrator in charge of this task is able to tell the difference between a new account and a cheat attempt.

Is this declaration mandatory?

It is ABSOLUTELY necessary to declare the shared connection. The reason is simple: multi-accounts search robot is in "exterminator" mode.

Is the validation of connection sharing by the other player mandatory?

If only one person declares a share AND that there is indeed an IP connection sharing, yes it is dangerous.

Should we declare all connection shares?

There is no need to declare a past share, nor is it necessary to keep temporary shares activated. But remember to do it in advance. For example, if you know that your brother / boyfriend friend / cousin is coming to your house for a few days, consider sharing the connection in advance.

Concerning the characters who are in retreat and who can share the account, should we bring them back to validate the connection sharing?

If the character is in retreat and does not log in, there is no risk of eradication.

Can we travel on the same ship?

Yes, but not both at the same time in the crew.

Can we be in an army fighting the army where there is a character who shares our connection?

Can we kill a character who shares our connection?

Can we fight at the Arena a character who shares our connection?

Can we contract a marriage with a character who shares our connection?

Can we give a grant to a character who shares our connection?

If we declare ourselves, does this indication appear publicly somewhere?

No, it's top secret, Celsius will never divulge any personal information other than what you write yourself on your character profile.

Has Inquisitor Zippo been deleted?

Regarding connections in public places (cybercafé, university, workplace, etc.) where other players could play, how do we do it?

Like before. The eradications remain manual, even if the detection robot is boosted.

If an account is in danger, are all those of the IP too?

But can both characters be in the same tavern?