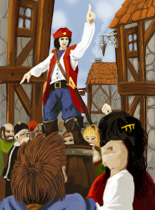 Concil elections are taking place every 60 days in the bailiwick of the town and have the purpose to elect counselors who are gonna run the duchy under the reign of the duke.

Those elections are using the "party-list proportional representation", which means:

The head of the list is the person who can pick which person is going to join the list, however, they will have to confirm their inscription to this list.

A single person can not be register on two different lists on the same election.

To be able to acquire votes, a list must have:

The vote's duration is six days, from the end of the seventh day before the mandate's end for the current council.

Is it possible to vote only once for each character, and for only one entire list. However, those being noble of the sword, even if they can only vote once, are giving two votes instead of one when voting.

At the end of this period, the result gives spot to each list proportionaly: 50% of votes=50% of spots.

At the first round, we give:

There is still one spot to give. It will be given to the list which has the highest remainder, here the English wiki.

Spots at the council :

English wiki would have the absolute majority.


Election of the count (or duke)

At the end of the council election, when the twelve members of the council are elected, they have two days to elect among themselves a duke that will take charge and will give them a fonction. After those two days, if there is an equality, a new vote takes place, for two days, until the council finally agree to elect a duke.

During the election of the new duke, councelors from the previous mandate still have access to their offices, and should handle gestion of the county. During this period, a counselor who is not elected again can not give his resignation. During this period, a counselor newly elected is able to give its resignation. If he had already voted, the counselor who will replace him would not be able to vote.

At the end of each turn of this election, each concelor receives the result of the vote, knowing exactly who voted or who.

Every councel can put his resignation from the council. (Warning: there is no IG conformation after clicking)

If the duke resigns durign his mandate, the following counselor of his list will enter the council, then new duke election will take place.

A dead candidate, whatever the reason is, keeps his spot in an electoral list. He can be elected for the following mandate.

A dead counselor keeps his spot on the council. It is not possible to make him leave.